[Note: The following images are screen caps of actual comments found in a single afternoon on March Against Monsanto’s Facebook page. -Merkolovic]

I love the idea of March Against Monsanto. I really do. A grassroots movement of concerned citizens rallying together to do battle in the fight between corporate interests and public good–I honestly wish there were more groups that had this kind of fire and passion for standing up to corporate bullies and pressuring elected officials to act in the best interest of the people rather than big business contributors.

The problem is that March Against Monsanto is based on a misunderstanding. This problem is exacerbated by the fact that the movement has been hijacked. What was once a movement of well-meaning-but-misinformed activists has turned into a crackpot train-wreck of conspiracy theorists, snake oil salesmen, and people whose utter divorce from reality makes them difficult to categorize.

March Against Monsanto was formed in response to the failure of a 2012 California ballot initiative that would have required labels on any food made from genetically modified organisms, commonly referred to as GMOs. At it’s core, M.A.M. aims at both removing GMOs from the food supply and taking down the Monsanto corporation.

The misunderstanding that makes this all possible is the idea that there is something inherently unsafe about GMOs. My first objection is that it isn’t useful to lump every GMO under one umbrella, as each specific organism is subjected to its own battery of testing. Being against all GMOs because one might be harmful is comparable to being against all electronics because some computers might be used to commit identity theft. That being said, there is a clear scientific consensus on the safety of GMO products currently on the market. This consensus is solid enough that pundits rightfully refer to GMO fear-mongering as the climate change denial of the left. 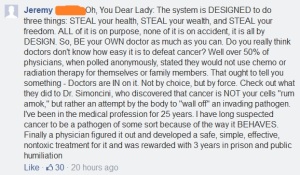 Where does the misunderstanding come from? Many anti-GMO activists will point to a study from 2012 led by Gilles-Eric Séralini which concluded that both genetically modified maize and glyphosate (the active ingredient in several herbicide formulas including Monsanto’s popular Round-Up products) caused an increase in tumors in lab rats. That paper has since been retracted due to a lack of statistical analysis which makes the paper’s conclusions indefensible and general sloppiness which doesn’t stand up to scrutiny. Rather than dismissing these debunked results, many of the anti-GMO faithful cite the retraction of the paper as evidence of a world-wide conspiracy between scientists, governments, and Monsanto.

So how do you convince someone that lack of evidence is not, in and of itself, evidence of a conspiracy? How do you point out the lack of logic in simultaneously believing both that 1) Monsanto “terminator seeds” won’t reproduce and 2) that Monsanto is suing farmers whose crops have accidentally reproduced with Monsanto’s (supposedly non-reproducing) plants? [Neither is true. See Myths #1 and #2 here.] Or the contradiction in believing 1) that GMOs haven’t been tested enough to ascertain safety while simultaneously believing 2) that there has been adequate testing to prove that GMOs are harmful? [Again, neither are true. Here and here.] 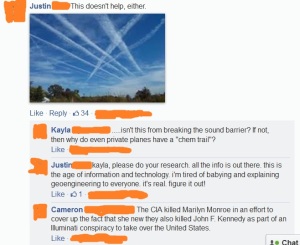 It becomes even more difficult when heroes of the March Against Monsanto movement such as “The Food Babe” Vani Hari, “The Food Ranger” Mike Adams, Dr. Mehmet Oz, and “Dr.” Joseph Mercola intentionally muddy the waters in order to carve out careers selling pseudoscience books and website ads for sketchy nutritional supplement companies. These four horsemen of quackery command a disturbing amount of web and media attention despite being unqualified, debunked, or in Dr. Oz’s case, even admitting there is no science behind the crap he’s promoting. These charlatans present a clear danger to people who need proven medical treatments but are recklessly convinced that doctors and scientists aren’t to be trusted. All of this brings up a third set of self-contradicting beliefs held by many anti-GMO-ers, 1) that Monsanto can’t be trusted because its profit motive, but 2) that The Food Babe/corporate organic farms, et al., have our best interests at heart.

Finally, as if there wasn’t already enough misunderstanding and misinformation, March Against Monsanto has fallen into the same predicament as other inclusive grassroots movements without central leadership. The extreme elements of an already fringe movement are making more noise and drawing more attention than the folks attempting a rational and intellectually honest pursuit of the truth. I already mentioned conspiracy theories related to collusion between scientists, governments, and big business money. As ridiculous as that sounds it’s just the tip of the iceberg. The comments on March Against Monsanto’s Facebook page are a minefield of conspiracies, woo, and delusion. Google “Monsanto chemtrails.” I dare you. Try “Monsanto depopulation” when you’re done. Add “illuminati” or “JFK” or any other conspiracy buzzwords. I’m not going to dignify such obvious nonsense with any more discussion.

The ironic tragedy of it all is that March Against Monsanto has unwittingly become exactly what it set out to kill–Misinformation, capitalist greed, and a danger to public health. There are legitimate concerns related to GMO science and corporate accountability in developing these technologies. Unfortunately, March Against Monsanto’s pseudoscience circus sideshow has proven itself incapable of sitting at the adult table for that conversation. The fervent focus on non-issues and imaginary threats leaves other corporations free to commit any manner of atrocities behind these activists’ backs.

4 thoughts on “Marching Off a Cliff Against Monsanto”